The Blake Society is one of England’s older societies and has its base in London, Phillip Pullman is the President and Alan Moore, Michael Eavis and Neil Gaiman are patrons. They provide a wide variety of programmed events throughout the year that seek to reflect William Blake’s broad spectrum of interest. While most of their cultural activities have been in London, The Blake Society has taken a great interest in the Felpham Cottage and in 2007 supported Felpham’s 250th anniversary celebrations of Blake.

Earlier this year the Society secured an option to buy the cottage for £520,000 a considerable reduction on the market price of £650,000. This reduction reflected, in part, the owner’s wish for the cottage to be purchased by a group of people that would take Blake back to the nation.

The Big Blake Project was established in Felpham in 2012 within Greener Bognor Network to linkthe local green spaces using William Blake’s poetry – The Blake Trail was born! A sixteen-page colour brochure was produced in conjunction with design consultancy, Loosemarbles, to support the Trail and the founder of the project was sought by the owner of Blake’s cottage and congratulated. A few months later the cottage came on the market and the owner suggested that the Big Blake Project contact the
Blake Society to become part of a consortium to secure the cottage.

The Big Blake Project then established in 2013 a William Blake Poetry Prize, the quality and diversity of entries was high and came in from around the world. The Big Blake Project has now worked with five of the twelve local schools to produce works of art and mosaics for public spaces. In liaison with Chichester University, it will embark on a literacy programme based around poetry in the two local secondary schools. The poetry of William Blake is on the A level English Literature syllabus and the National Curriculum for year nine. 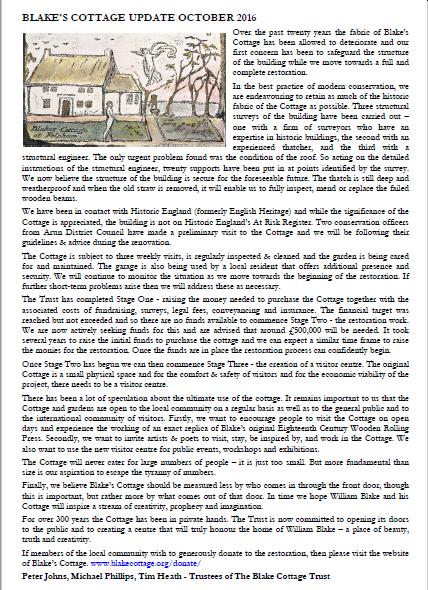 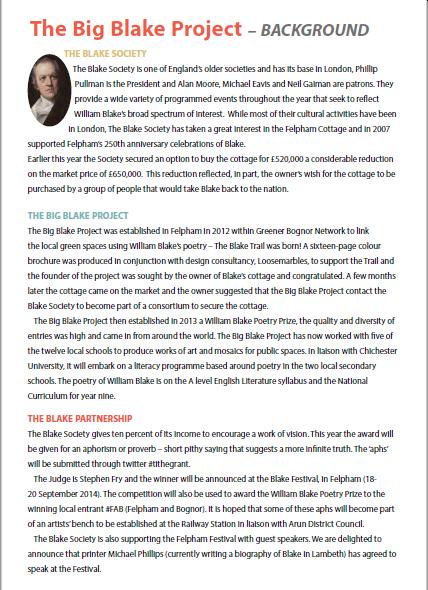 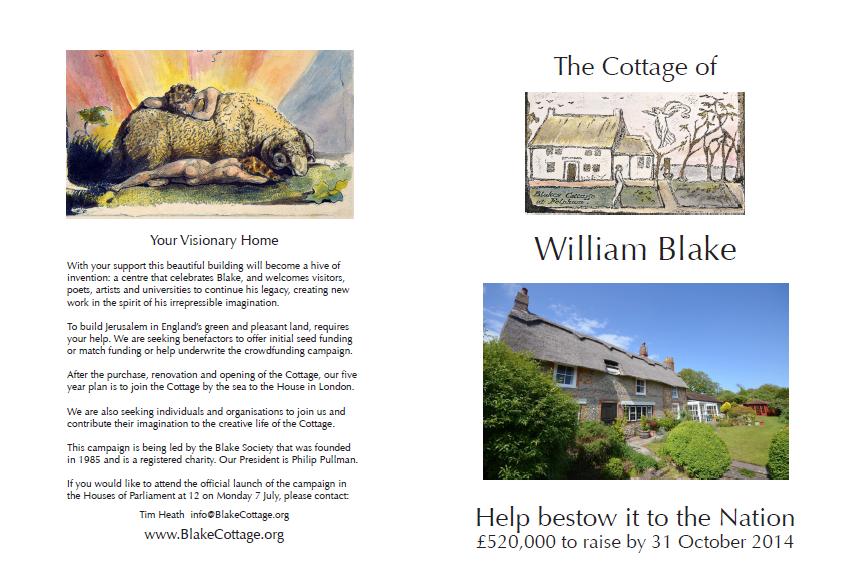 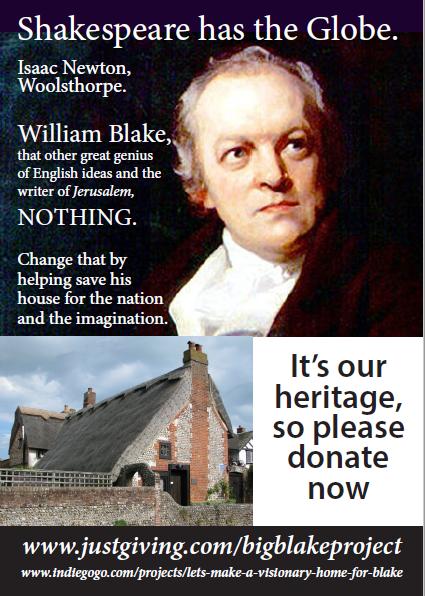 THE COTTAGE. The Cottage is to be a home for the dissenting imagination in England’s Green and Pleasant Land that honours William Blake’s uncompromising pursuit of truth, beauty and freedom 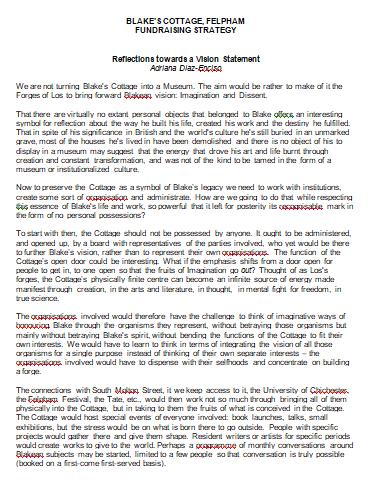 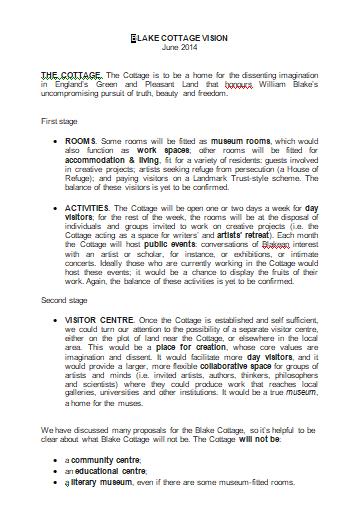 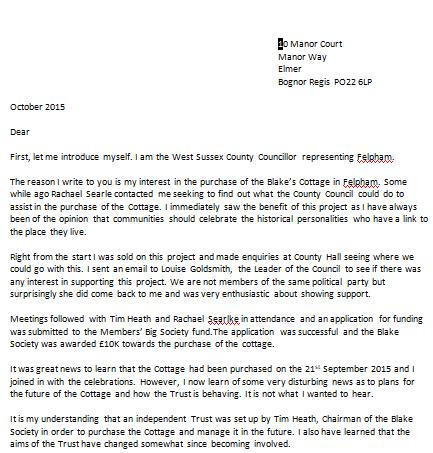 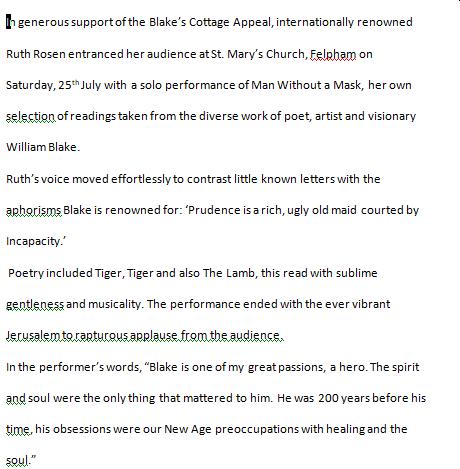 In generous support of the Blake’s Cottage Appeal 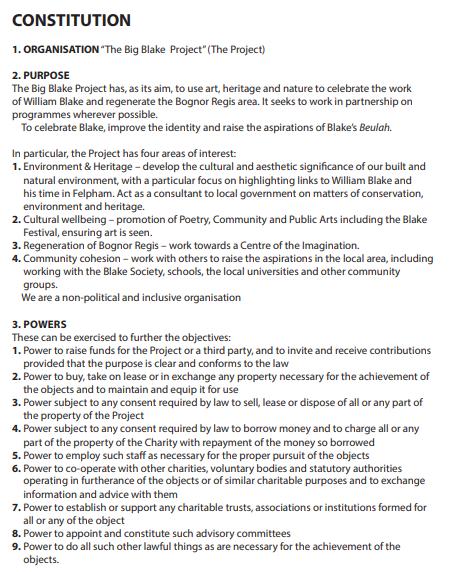 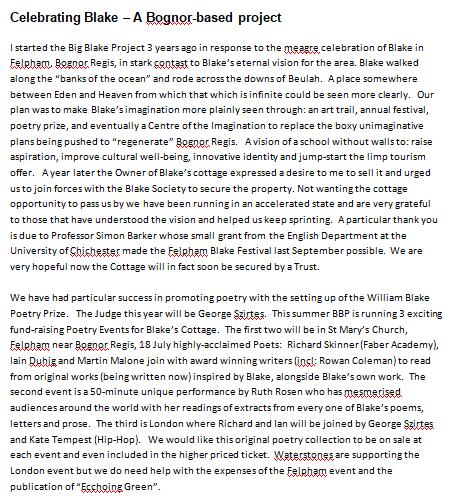 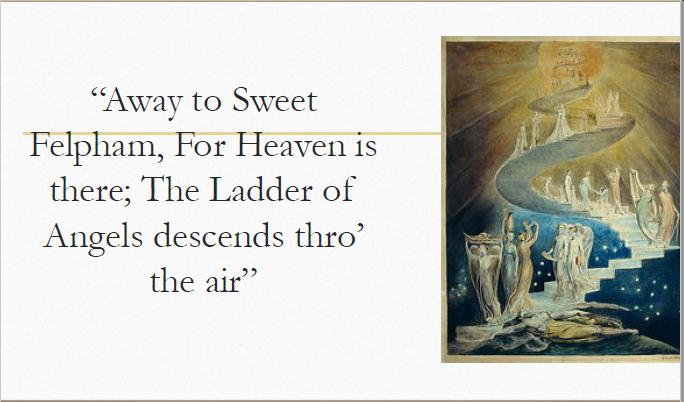 Away to Sweet Felpham, For Heaven