#35 The Garden of Love - Simon Mouatt

#47 The Voice of the Ancient Bard - Jude Rawlins

#35 The Garden of Love - Simon Mouatt

#47 The Voice of the Ancient Bard - Jude Rawlins

William Blake was placed 38 in the BBC's poll of the 100 Greatest Britons. Considered mad by some contemporaries for his idiosyncratic views, he is now held in high regard for his expressiveness and creativity, and for the philosophical and mystical undercurrents within his work. He lived in London his entire life, except in 1800 he moved to ‘Rose Cottage’, Felpham for three years to take up a job illustrating the works of William Hayley. Whilst in the cottage Blake began Milton which includes a poem beginning "And did those feet in ancient time". Over time, Blake began to resent his patron, believing that Hayley was uninterested in true artistry.
more infohide info

Today, Blake is still very much part of Felpham. Some 200 years since he walked our lanes, admired our fields and painted from our beach he is enshrined in the history of our ‘sweet Felpham’. So, it was fitting that finally Big Blake in conjunction with Felpham village Conservation Society put on an afternoon devoted to William Blake and offering local people a chance to come and understand a little of the man, his art and his visions.

After a year of planning, preparation and publicising, BlakeFest 2019 began the Sunday before the main event with "Unpacking Blake", a collection of art, a live music performance and a panel discussion, with talks by four Blake experts, at Felpham Village Memorial Hall. With no idea of how many people were going to be in attendance it wasn't heartening that it was absolutely pouring down with rain. Fortunately, the skies cleared after a while and people arrived, in their droves.

Prior to the musical performance, viewers were able to, while enjoying freshly made tea, coffee, cakes and scones, examine representations of some of Blake's art and to experience speaker/Artist Dr. Mikey Georgeson's 'Aesthetic Machines' immersive exhibition. This is a varied collection of, often, interactive installations (two of which have graced previous BlakeFests). Screens and sounds, a childhood bathing memory, a giant egg, a character called Kimey Peckpo, 'Actual Occasion' and 'the nonbifurcated man', among others, captivated and intrigued the curious and appreciative throng also foreshadowing Mikey's upcoming panel presentation, more of which later.

With around 120 people in attendance, the Hall ran out of seating so it was standing room only at the back with people still in the entrance hall when Across The Sea began their live music performance. A combination of textured acoustic guitar effects/ambience of Pete Ferguson with the angelic, expressive voice of Hannah Katy Lewis, Across The Sea best described their style as "Prog/Folk", building landscapes of sound with clever effects-pedal treatment from a single acoustic guitar allowing Hannah's voice to swoop and story tell over the sonic surface intertwining with the inventive shifts in rhythm and harmonic structure. This truly magical duo echoed the transportative and transformative spirit of Blake's work and even performed a spellbinding version of Jerusalem especially put together for this audience.

The four panellists all unpacked different aspects of the impact of William Blake on our society.

Dr Luke Walker spoke about Blake's work and his influence on British counter culture and radical politics in the 1960s and 1970s. Blake was 'rediscovered' and reassessed around 150 years after his death, after remaining virtually unknown and unappreciated during his own lifetime, by the likes of Ginsberg (famously pictured outside Blake's Felpham cottage, uncharacteristically beardless) and Dylan. Blake was finally given his true status as a visionary genius and influencing a shift in creative thought and art.

Dr Simon Mouatt covered how Blake and the Romantics challenged the Enlightenment ideals and informed contemporary psychology, neuroscience and philosophy. Very well-illustrated, this talk delved into Blake's understanding of the Mind, showing a deeper understanding, through his works, than was the accepted wisdom of the time. Far-reaching thoughts and illuminating another facet of Blake's visionary insight.

Dr Mikey Georgeson gave a talk which evolved into an aesthetic poetic performance demonstrating how Blake's thought and mysticism has inspired the philosophy that underpins the practice and dissemination of contemporary art. Captivating the audience with a talk explaining the aesthetic aspects of Blake which, as the presentation developed, backed by a video/audio experience, built to a half-enunciated/recited/sung crescendo exemplifying the effect and provoking spontaneous audience applause.

The panel talks were rounded off perfectly by Cultural Historian author John Higgs on why Blake matters now; a constant presence from video games to novels, from sporting events to political rallies and from horror films to designer fashions. Covering the emergence of Generation Z, a leap forward in society, social mobilisation and access to a whole internet of knowledge, Blake has now become deeply ingrained in our culture. One of the most surprising aspects of John's talk were clips of current video games featuring Blake's direct influence, one of which has a character which will verbally quote Blake at any given time.

There followed a 'Question & Answer' session which involved mainly local residents giving their perspectives of the 60s and opinions on some of the comments made during the talks. Some of these were so un-questionlike that they inspired present poet/Blakehead Stephen Micalef to write a poem entitled "Is that a question". After three hours of art, music, talks and highly-engaged discussion we closed the event and after uninstalling the artworks we adjourned to nearby Blake-era pub The Fox to unravel "Unpacking Blake" and hailing it a well-attended success and a positive, uplifting start to BlakeFest 2019

Here are examples of the variety of the speakers that we had for our BlakeFest 2015 Literary Event.

Here are a selection of photographs capturing our Poetry event at the SeaFish venue as part of BlakeFest 2016.

At BlakeFest's 2017 event we had a selection of performance poets who entertained and enlightened our audience, showing how relevant this form of communication still is. Poets included Glastonbury mainstay Atilla The Stockbroker, punk poet Stephen Micalef and Luke Wright.

Here are a selection of photographs taken during the variety of talks and psychogeographical walk that took place during 2018's BlakeFest. Dr Luke Walker, Professor Fiona Price and Niall McDevitt were among the speakers, engaging the audiences with the magic of Blake's work and its impact.

In 2018 we had talks at Blake's Cottage, a street play in Felpham and poetry at our main BlakeFest event at The Regis Centre in Bognor including readings from The South Downs Poets.

In the run up to BlakeFest 2019 we hosted an Open Mic poetry event at The Hothampton Arms in Bognor Regis including a performance from Stephen Micalef and hosted by Owain Virgin.

Life Behind The Wall

Professor Mazin Qumsiyeh, Palestinian Christian, from Bethlehem talked about life under Occupation behind the wall. It was a rare opportunity to meet an erudite scholar and prodigious campaigner for peace and justice inspiring hope, empowerment and equal rights for Palestinians. Formally based at Yale University, returned to his village near Bethlehem 12 years ago and set up the Palestine Museum of Natural History at the University of Bethlehem. He is at the forefront of the struggle for truth and civil rights in Bethlehem today. 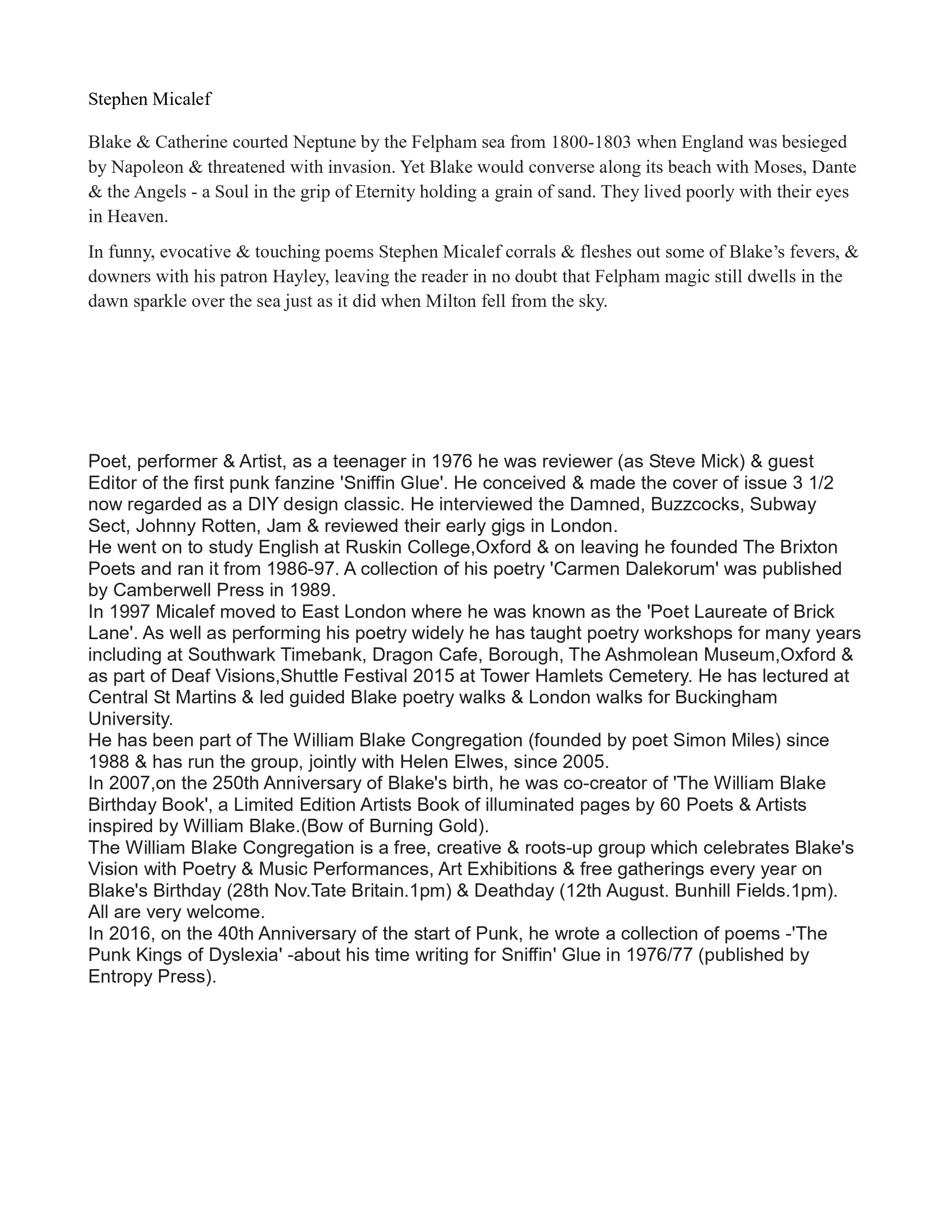 Irish poet Niall McDevitt leads a wandering lecture through Felpham village, following the trail of its legendary resident, the poet and painter William Blake. The focus will be on one of Blake's many unique achievements in Sussex, the series of portraits he was commissioned to do for his patron William Hayley's library. 'Heads of the Poets' features typically idiosyncratic busts of world poets from Homer and Dante to Shakespeare. McDevitt will also highlight tensions in the relationship between Blake and the patron he regularly lambasted in verse.

"When Hayley finds out what you cannot do
That is the very thing he'll set you to."

Kate Pollard is a Bognor resident who has exhibited artwork in the town over the last 10 years, including a piece in the 2017 Dandelion Visions exhibition and had recently branched out into writing. Her debut novel, The Brightness, was released on Amazon Kindle in 2014. It was followed in 2015 by the sequel, The Breakout, completing the story which has been described as "a tale of supernatural fantasy in the genre of CS Lewis and Tolkien in the best possible way." Her books appeal to all ages from teenager to adult. In 2016, both books were published in paperback by The Big Blake Project.

Below are a collection of The Big Blake Project's publications in 2015.