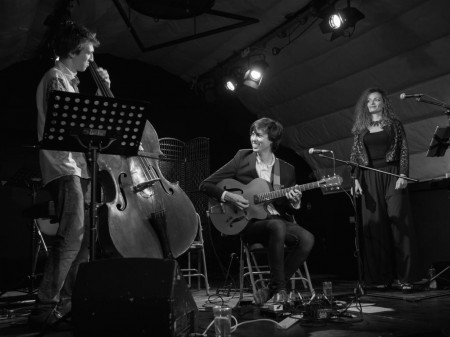 Rising stars of the jazz world, the Jamie Leeming Trio with star vocalist Emily Dankworth will entertain in the Studio. “Guitarist Jamie Leeming lifts the sound to a whole new level” – says Jazzwise. Given Emily’s musical heritage – granddaughter to Dame Cleo Laine and the late Sir John Dankworth as well as niece to Jacqui Dankworth and daughter to Alec Dankworth – it is no surprise that she has her forté in music.

Jamie Leeming is fast building a reputation for himself with his lyrical guitar playing, refined compositions and mesmerising live performances. His debut EP “Heartsong” was listed as one of Jazz London Radio’s “Best Jazz Releases of 2015” – the genre-crossing compositions have strong roots in the jazz tradition, with folk-influenced imagery and textures. Notable performances for the band include those at Love Supreme Festival, Pizza Express Dean Street, and New Generation Jazz Brighton.