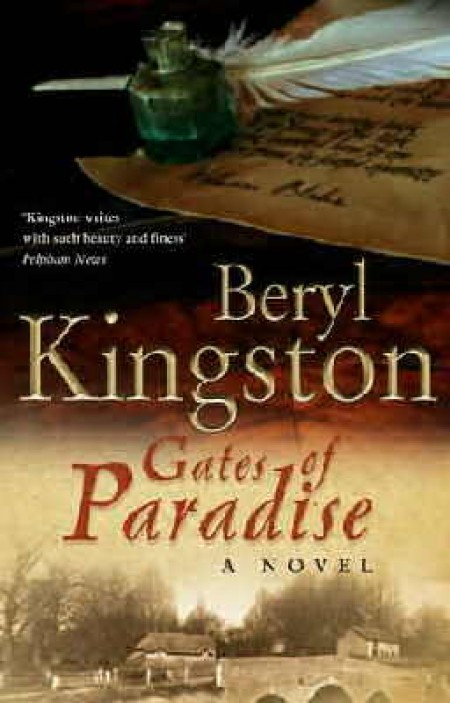 Beryl has been in love with Blake for “over 60 years”. This inspired her to write The Gates of Paradise which she finished in 2006.

The Gates of Paradise is the story of the three years the poet William Blake spent in Felpham, of the impact of his revolutionary ideas on a pair of young lovers, of his quarrel with a trooper and his subsequent arrest and trial for sedition.

It is also story about people, places and art; it’s centred around The Fox Inn in Felpham. In April 1852 Alexander comes to stay, trying to discover more about a former resident of Felpham: a certain William Blake.

In doing so he unearths the history of this small village; its people and the secrets they hide.

‘When I first heard that Felpham Church was going to commission a stained glass window to celebrate William Blake, I felt like singing.

It seemed so entirely right, so obvious, so joyous, for it’s always seemed to me that Blake was one of the most deeply religious men who have ever lived in our village. It was his firm belief that ‘Everything that lives is holy’ and like Milton before him he considered that his life’s work was ‘to justify the ways of God to man’.

Nothing less would do. For him God was omnipresent and in all of us. God Appears he wrote, and God is Light To those poor Souls who dwell in Night, But does a Human Form Display To those who Dwell in Realms of Day When he was four years old, he saw God looking at him through the window and screamed aloud in terror; when he was eight and walking on Peckham Rye he saw a tree full of angels, their bright wings shining like stars on every bough; in his early forties he saw the prophets Isaiah and Ezekiel rising from the sands of Felpham beach, five, ten, fifteen feet into the air. He was in every sense of the word, a visionary.

If he were living today I’m afraid he would be diagnosed as a schizophrenic and quietened with drugs, but in the early nineteenth century visionaries were not just acceptable, they were honoured. And Blake was not a man to keep quiet. He sang his wonderful, deceptively simple songs every day of his life and he died singing, saying he was going to that country he had all his life wished to see and that he was happy, hoping for salvation through Jesus Christ. Just look at this poem, celebrating the compassion of Jesus. It is another song – almost a carol. He doth give his joy to all; He becomes an infant small; He becomes a man of woe; He doth feel the sorrow too Think not thou canst sigh a sigh And thy Maker is not by; Think not thou canst weep a tear And thy maker is not near. O, he gives to us his joy That our grief he may destroy; Till our grief is fled and gone He doth sit by us and moan.”‘