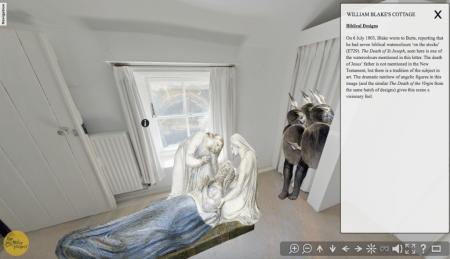 The BlakeFest weekend may be over for this year, but the exhibition at Bognor Library continues until 7 October (open 2-6pm, Thursday-Saturday). Here, Naomi Billingsley writes about her experience of curating the virtual tour of Blake’s Cottage that features in the exhibition.

Last summer, I was approached by Rachel Searle of the Big Blake Project to work on an exciting project – to curate a virtual tour of Blake’s cottage in Felpham.

Photographer Jason Hedges had captured 360° shots of the interior and the garden of the cottage. My job was to come up with a scheme to populate each part of the tour with Blake’s designs.

There are six zones in the tour – four rooms and the stairwell inside the house, and the garden. So one of my first jobs was to think about six themes to focus on in the tour.

The stairs and garden almost took care of themselves, and each of the four rooms focuses on an aspect of Blake’s work related to his time in Felpham. One example, explores Blake’s work for William Hayley, who lived at nearby Eartham and at whose invitation the Blakes moved to Felpham.

When I had come up with ideas for each space (including identified images that we could use without incurring expensive licensing fees) I sent them to Jason, who brilliantly turned them into virtual reality.

Rachel wanted the tour to be an opportunity for viewers to learn about Blake’s his time in Felpham, and about his art and ideas, so I also wrote an introductory text for each zone, and captions for selected images.

The texts appear when the viewer selects the ‘i’ icons, so s/he can choose to read as many or few as s/he wishes. An example is illustrated below in a room that focuses on the biblical watercolours that Blake produced during his time in Felpham.

The Belgian composer, Lucien Posman, who has written many settings of Blake’s poems, kindly gave permission to use some of his Blake works as the soundtrack to the tour. The music is a wonderful addition to the tour that enhances the immersive experience.

I’m not sure what Blake would have made of photography, but I think he might have enjoyed the idea of a virtual reality tour – describing one of his paintings, Blake wrote that he wanted the ‘spectator’ to ‘enter into these images in his Imagination.’

In my academic work, I’ve spent a lot of time thinking about Blake’s images in an analytical way. I really enjoyed engaging with his designs in more playful and creative ways for this project. It was an interesting challenge to come up with a scheme that could simultaneously be visually impressive and tell a story about Blake’s time in Felpham.

I’m looking forward to hearing what visitors to the BlakeFest exhibition make of the tour, and hope to see it shown elsewhere soon.

Naomi Billingsley is a Leverhulme Early Career Fellow at the University of Manchester, who researches British Art of the Romantic Period. She is currently finishing a book about Blake’s images of Christ. She was living and working in West Sussex when she curated the virtual tour.

The William Blake Cottage Tour can be seen in the BlakeFest exhibition at Bognor Library until 7 October (open 2-6pm, Thursday-Saturday). Other showings will be announced soon; the tour can also be viewed online.