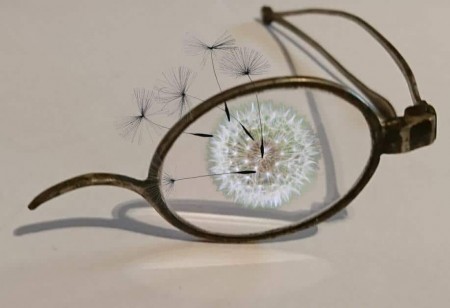 Dandelion Visions exhibition @ Bognor Regis Library
In the unlikely location of the West Sussex seaside town of Bognor Regis a cultural stirring is occurring. The Dandelion Visions exhibition is the centrepiece of a townwide celebration of the life and work of William Blake (1757-1827) who is nowadays recognised as a visionary poet, artist, engraver and prophet despite dying unrecognised and close to poverty. This Exhibition is free to attend and will be running at Bognor Regis Library from 16th September until the 7th October.

Blake lived in the village of Felpham, on the outskirts of Bognor, from 1800-1803 where he saw visions of Angels, was inspired to compose the text which is known as, and widely-celebrated as, 'Jerusalem' and also ended up on trial for assault and sedition after an altercation with soldier outside a local drinking establishment. In a letter to John Flaxman from 1800, Blake wrote that "Felpham is a sweet place for study because it is more spiritual than London. Heaven opens here on all sides her golden Gates; her windows are not obstructed by vapours; voices of Celestial inhabitants are more distinctly heard, & their forms more distinctly seen; & my Cottage is also a shadow of their houses." His cottage, which he described as having "a roof of rust'd gold" and being a "perfectly proportioned palace" is currently in the hands of a Trust who one day hopes to open its doors to the public. Before that is possible, due to necessary extensive restorations and renovations, as part of the Dandelion Visions exhibition, a Virtual Tour of Blake's Cottage will be available to view through VR goggles to bring a 21st Century view of Blake's existence and work at the very beginning of the 19th Century, curated and spearheaded by local resident and Blake-enthusiast Rachel Searle to gather together different artistic streams to celebrate William Blake.

Blake's work has spread like dandelion seeds through the generations, persistantly inspiring groups of artists beginning with The Ancients including Samuel Palmer, George Richmond and Edward Calvert, who all studied directly under Blake until his death. The Ancients inspired the pre-Raphaelite Brotherhood, notably Dante Gabriel Rosetti, who resided, for a time, in Bognor and acquired a manuscript book of Blake's "from an attendant at The British Museum" which he obsessively studied and laboriously copied out. Modernists such as James Joyce clearly show Blake's influence and his influence also inspired such 60's Beat Generation poets and performers as Allen Ginsberg, Michael Horovitz (who is performing at this year's Blake Fest), John Lennon, Bob Dylan, Jim Morrison and Patti Smith. His legacy lives on strongly today and he has been heavily referenced by, among others, Stephen Fry and musicians such as Bono, Richard Hawley and Pete Doherty in recent years.

Bognor Regis is a town poised at the brink of regeneration following similar projects in Margate, Hastings and Liverpool, possibly including a major "William Blake Theatre" (in one of the proposals), which channel local Culture and Arts to enrich their current heritage and touristic allure. Blake Fest 2017 will highlight a variety of Arts in various forms around the town including acclaimed poet-in-residence Stella Bahin, who will create a unique 'community poem' infusing ideas sounds and visuals, guided walk with psycho-geographer Niall McDevitt, and performances from Stephen Micalef, (the aforementioned) Michael Horovitz with his William Blake Klezmatrix Band, Tymon Dogg, Attila the Stockbroker, Martin Chomsky, Justin Coe, Luke Wright and Gwyneth Herbert. Full lineup details and tickets for performances are available at www.blakefest.co.uk

The Dandelion Visions exhibition at Bognor Library took its initial inspiration from a broken pair of Blake's spectacles, found in the garden of his Felpham cottage, which are one of the very few surviving artifacts from his life. Its curator, Mikey Georgeson, is best known as singer/frontman of conceptual band David Devant & His Spirit Wife (who are also performing at this year's Blake Fest) where he was known as 'The Vessel' and will be showcasing his installation, 'the Nonbifurcatedman'. Georgeson currently lectures in Art at The University of East London specialising in, and regularly exhibiting, his non-representational art at galleries across the country.

In Georgeson's words:
"Dandelion Visions is an audio-visual exhibition celebrating Blake's belief in the value of imagination and the visionary powers of every human individual. It gathers together a group of international artists who have responded to Blake's universal influence. (The) installation 'the Nonbifurcatedman' takes us on a car journey into nature and the role played by the imagination in the creation of memory and collective reality.

Blake's spectacles found in the garden of his cottage of Felpham will be on view as a reminder of his idea of the boundless fourfold vision of imaginative engagement. A virtual reality tour guides us through Blake's home in Felpham where he wrote the lines known as Jerusalem. Therein visitors will encounter the allegorical figure at the heart of his vision.

Before the opening there are workshops with Stella Bahin where participants can collectively explore the poetry of time and memory found in the dandelion and its magical seeds. The resulting work will help map the exhibition's town-specific soul."

Mikey Georgeson is curating the Dandelion Visions exhibition from many artists who have contributed work, ranging from as far as Berlin, India and Istanbul.
Full details of the Dandelion Visions exhibition (FREE ENTRY September 16th-October 7th), Blake Fest 2017 (September 16th/17th) and tickets for performances are available at www.blakefest.co.uk