The French Revolution took place in 1789 and the King was overthrown. Britain and France were at war when William Blake went to live in Felpham in 1800. There was a peace treaty made in 1802, but that was soon broken by the French. In May 1803 Dragoons [soldiers] were stationed in Felpham to stop Napoleon’s forces landing if they tried to cross the channel in flat boats. Local men also joined the volunteer militia forces which were responsible for fighting the French if they arrived. There was a real fear that there would be a French invasion in the Summer of 1803.

At the time Felpham was a very small village with between 25 and 30 houses. The best known resident was William Hayley. He was a very popular poet and writer at the time and lived in Turrett House. It was about midnight on 18 September 1800 when William Blake and his wife, Catherine, arrived from London in Felpham. William Hayley employed Blake to engrave some pictures for a book which he was writing and also got him to paint some portrait heads for his library. Blake soon became part of Hayley’s circle of friends and acquaintances.

Only men aged between 21 and 70 could serve on a jury. In addition, there was a property qualification which meant that men had to own or rent land or houses worth more than £10 a year. This meant that no labourers could be on a jury.

There had been a lot of opposition in Chichester to the troops stationed in the area because it was thought that their number had driven up the price of bread and led to other shortages. The presence of the troops was also believed to have caused increased drunkenness, fighting and a general deterioration in behaviour. 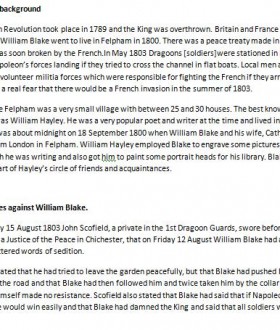 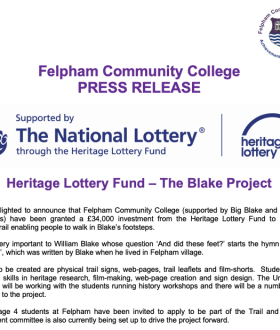