BlakeFest is a unique cultural experience by-the-sea celebrating an eclectic and exciting mix of music, art and poetry, as well as offering a varied programme of talks, walks and workshops.
more info</span >hide info</span >

An eclectic mix of words and music set in the Sussex seaside town of Bognor Regis. William Blake lived in the adjoining village of Felpham from 1801-1803, where he saw visions of angels, was inspired to write Jerusalem and was later placed on trial for sedition in Chichester after an altercation with a soldier outside an inn. Poetry events are curated by the South Downs Poetry Festival. Music includes Charlotte Glasson jazz trio, with legendary guitarist Chris Spedding. Many more bands and musicians lined up throughout the day.

Alan Morrison, Mandy Pannett and James Simpson. Three fine South Downs poets present individual takes on poetry today. Coruscating political poetry from Alan Morrison as he launches his newest book, Shabbigentile, South Downs wit and wisdom from Mandy Pannett and Hardyesque mythology from James Simpson’s The Rhyme of the Reddleman’s Daughter. Morrison is well known in new left circles and was nominated for the Forward Prize; Pannett has been nominated for the Robert Graves Award and Simpson is an Arvon/Jerwood Award winner.

Lucy Kitchen - In the search for touchstones

Lucy is often compared to the likes of Joni Mitchell, Beth Orton and, vocally, to Sandy Denny – "Lucy’s vocal tone has hints of the late Sandy Denny in it – a rare and precious thing indeed" (bestnewbands.com) but her sound is all her own. Since her last album, Waking, Lucy has been in demand as a vocalist, working with a number of electronic music acts to write and record songs that have been championed by the likes of BBC Radio 1 and Mixmag. She’s also performed on the John Peel Stage at Glastonbury festival. "These are strong and striking songs, delivered with both fragility and conviction, which deserve to be heard. A gorgeous, atmospheric offering." - Folk Radio UK “Lucy Kitchen has one of those real summer breeze voices, fresh and warm, and it’s very much to the fore on her second album that contains a myriad of delights. And she’s opened up her musical palette here with piano, steel pedal and strings all featured on a release in which she also brings in elements of Americana and lightly toasted psychedelia.” - The Crack Magazine

Stimulating mix of poetry and jazzy sounds. A stimulating mix of poetry and jazzy sounds. Raine Geohegan is a Romani poet currently performing at festivals with her Hedgehog Press book of Romani life poems, Apple Water: Povel Panni. Andy Brown is a Professor of Creative Writing at Exeter University with several collections of poetry to his name, including The Fool and the Physician based on the paintings of Hieronymus Bosch and Fall of the Rebel Angels: Poems 1996-2006. He is also a novelist and the editor of A Body of Work, an anthology of poetry and medical writing. Barry Smith was runner-up in the BBC Proms Poetry Competition and is the director of the South Downs Poetry Festival. Widely published in poetry magazines, he regularly works with jazz and roots musicians.

Charlotte Glasson is an in-demand multi-instrumentalist who has played with the likes of Oasis, Unkle, Divine Comedy, Nick Cave, John Cooper Clarke, Foy Vance and Julian Lloyd Webber... She brings her own jazz combo to Bognor BlakeFest at the Regis Centre on Saturday 28th September. A massively experienced performer, she includes, in her musical line-up, the legendary Chris Spedding which absolutely guarantees a high quality musical experience for anyone who attends. Apart from his hit single "Motorbikin", Spedding's guitar credits read like a who's who of popular music... Paul McCartney, Jeff Wayne's War of the Worlds, Nilsson, Jack Bruce, Alan Parsons, Roxy Music, The Wombles, Roger Daltrey to name a few. Simply put, this guitarist's guitarist has chosen to play with Charlotte Glasson and brings an extra element to her esteemed musical talent for a not-to-be-missed performance.

From within the hull of Noah’s Ark comes a quirky series of family-friendly folkesque tunes, unlike anything you’ve heard. Using vocal dexterity, honky instruments, household implements and the furthest reaches of imagination, the cast of characters regale us with their wonderfully enchanting tales.
The crew: BRUCE KNAPP // Slidings /, Dobro, Ukelele & VocalsDAVE SOOTHILL // Ramblings / Mandolin, Guitar & Vocals STEVE CUBITT // Gruff / Box on Legs & Vocals PHILIP PALMER // Noah / Guitar, Banjo & Vocals ROB SMITH // Twinklings, Banjo, Ukelele, Toots, Clunks & Vocals
Sirens of Titan Heralding the death of a distant star some 4000 years ago, Sirens of Titan sang the universe into a new period of spiritual liberation and inter galactic musical exploration. Rings of milky pop melodies and strident moons of psychedelic rock orbit around constellations of expressive joy, and improvisational tendencies. The Sirens are fronted by the mighty bardic Titan Mike Fry and joined by percussive time-traveller Steve Cubitt, and the emissaries of the Hedula galaxy, Duncan Burgess and Keith Sutton. “They blew me away... one of the best live bands I’ve seen in a longtime... they really cast a spell all their own. Perfectly poised between structure and disintegration the Sirens aren’t afraid to explore new musical territory. Mike is majestic at the helm, bringing a visceral energy to proceedings and his cerebral reflections on life the universe and everything are well worth listening to!” Olivia Stevens

Julie works in ceramic, bronze and found objects. Taking the forms of animals or mythic creatures, influences are from literature, music and the Gothic. “I like to tell stories. For this show I have made works that are inspired by Blake’s belief in the imagination, and his visions of fairies in his garden.” Julie's work explores the hidden recesses of the subconscious holding both a dreamlike quality and emotional intensity. Based in London she has exhibited her widely. Last month her work was on the front cover of the International Times Vincent Gray. With wide industrial experience including television, theatre, design and manufacturing, Vincent Gray has worked alongside some notable and highly regarded names in the arts, engineering, military and entertainment, both in the UK and in Scandinavia. His work has introduced him to many leading lights and free thinkers, which he says, ‘do not fail to inspire and influence’. He is the sculptor of the life-size statue of John Keats in Eastgate Square and Leonard Bernstein at St Richard’s Hospital in Chichester. He is currently working on a bronze of Admirals Nelson and Murray and has the ambition to erect a statue of Blake’s Glad Day on Bognor Regis seafront.

Prof Fiona Price Blake, the French Revolution and History. History has always been important to the British, particularly when they think about politics. Blake was no exception. But his imaginative recreations were subversive. In his poem The French Revolution Blake uses allegory and allusion to challenge monarchical government and to re-imagine past and present. His poem can be read as part of the explosion of imaginative history that occurred in Britain after the French Revolution. This paper examines Blake's tactics and compares them to those of his fellow radical, Mary Wollstonecraft.

Dr David Fall on The Road of Excess: Blake as Patron Poet of Pop Music

Blake is everywhere in pop music and has infused his flavour into a radical strain of mythic and visionary songs since at least the 1960s. In this talk I’ll look at why Blake’s works might be so inspiring and hold such appeal for pop musicians. I’ll examine some examples of pop songs inspired by the Blakean muse by, among others, The Doors, Nick Cave, and Julian Cope. I’ll be showing how Blake’s rebellious spirit informs not just the content of the songs, but the songwriters’ approach to Blake himself.

William Blake re-emerged one hundred and fifty years after his death to become a presiding spirit of the transatlantic counterculture. His poetic and spiritual influence was central to the ‘new vision’ of the American Beats, but Blake was also an important part of British counterculture and radical politics in the 1960s and 1970s. This talk explores Blake’s influence on the poets featured in the 1969 anthology Children of Albion: Poetry of the Underground in Britain, and shows how this can be linked to the New Left politics and radical social movements of Britain in the period.

‘BlakeFest went brilliantly this year... it just seemed to flow from one exciting thing to the next. Everyone seems to have thoroughly enjoyed it. And so good to have the boost of that Arts Council support’. ‘The whole day was an absolute joy and made more so by you (Charlotte) and your wonderful co-musicians. Feedback has been 100% positive, with many complimentary comments. Barry Smith - South Downs Poets From Bognor Regis Post. From Facebook, Dr Naomi Foyle.

Congratulations Rachel Searle, Olivia Stevens and all who co-created another marvellous Blakefest! As the winds roared along Bognor seafront, fiery Tygers prowled through the forest of our minds... thank you to Fiona Price, Luke Walker and David Fallon for the fascinating talks on Blake, revolution and counterculture, to Beatnik Barry Smith for his properly jazzed up poems, performed with Charlotte Glasson and her band, and for curating compelling readings from Alan Morrison, Raine Geoghegan, Mandy Pannett, James Simpson, and Andy Brown, spanning radical politics, Roma histories, South Downs discoveries, illness and eco-apocalyptic folktales; to artist Julie Goldsmith for her fabulous fairyland figurines, sculptor Vincent Grey for his vision of a 15 foot tall bronze 'Glad Day - Albion Rose on Felpham's shore, and finally to poets and Blakean guides Stephen Micalef for bringing the Blakean banner 'Everything that Lives is Holy' into Extinction Rebellion, and Niall McDevitt for illuminating Blake's contrariness in his view of 'Nature as Devil'... Yet 'without contraries is no progression' and at a time when children are forced to weaponise their innocence, and XR is fuelled by our collective creativity, Blake is a prophet for our times, as much as for his own and for the sixties. BlakeFest is now deservedly in receipt of Arts Council funding, and I look forward to seeing it continue to grow, brightly asserting the role of the arts in regenerating and re-enchanting our sick rose of a world.</div> 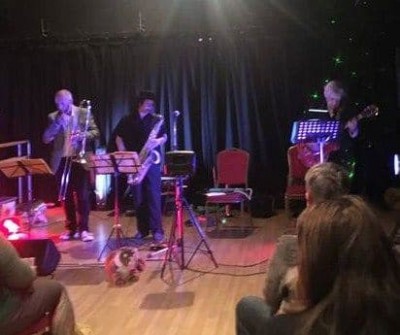 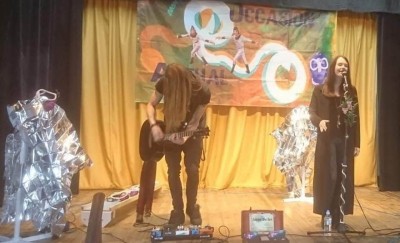 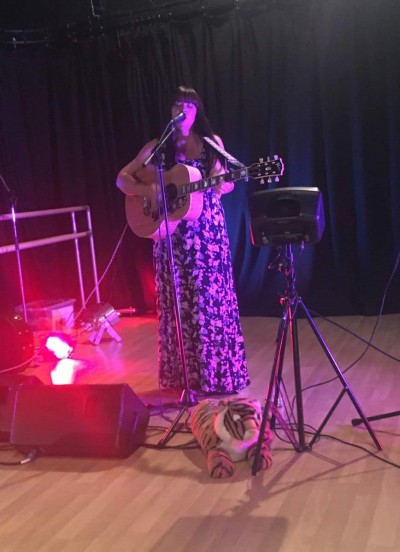 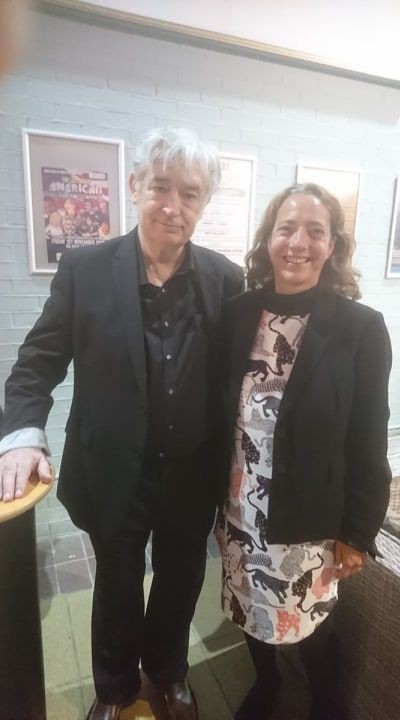 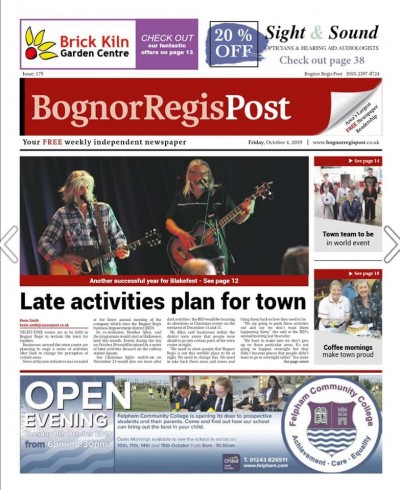 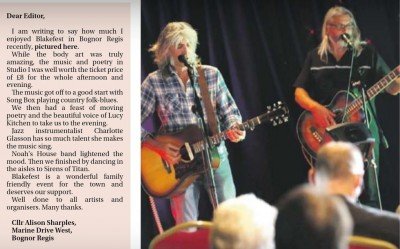 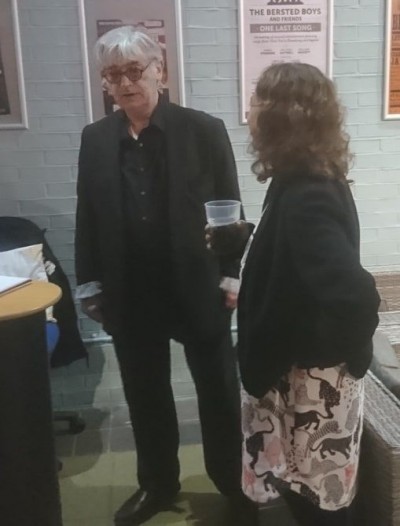 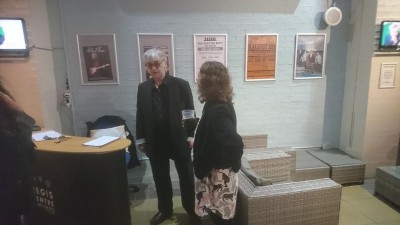 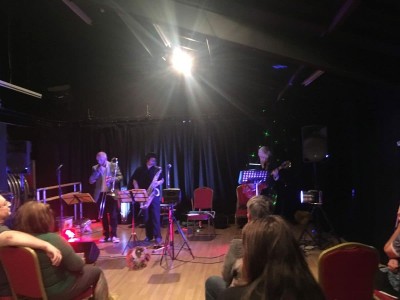 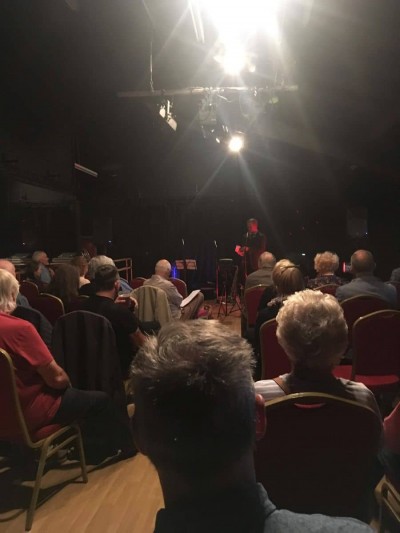 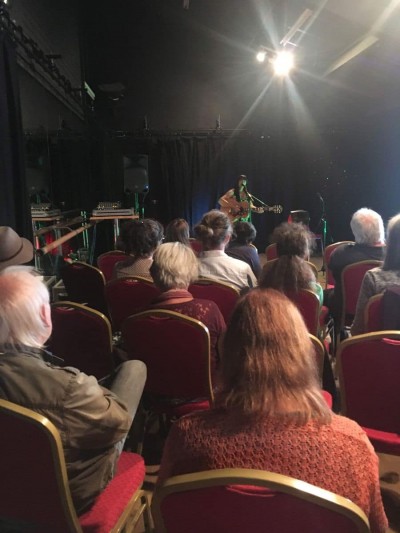 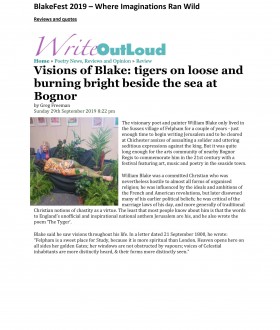