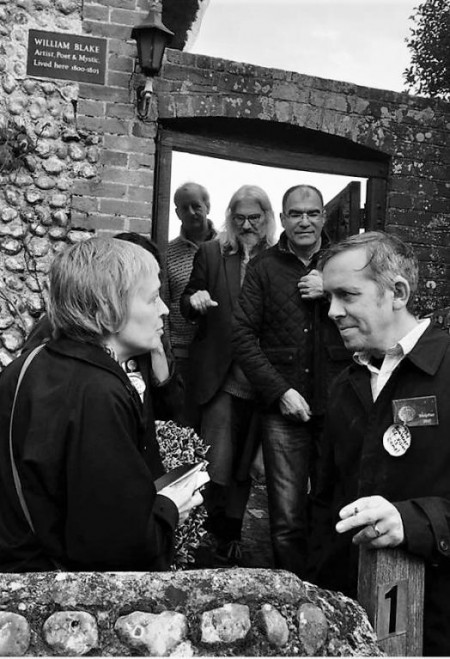 Rachel Searle, Blake Fest Artistic Director:
For bringing and holding Blake Fest 2017 together (‘We’ll do it’, ‘yes’, and, ‘like God’s warriors’)

Sedge Seymour, Blake Fest Contributor:
For proofreading, for editorial and general support, and for the recently stubbed toe which, fortunately, isn’t affecting his stride (for the idea, anyway, ‘we’ll do it with a limp’)

Alice McCabe, Artist, Florist:
“Be you musician, muse, or not musical, the viewing of triangle players grows triangle players!” (‘triangle’; keeping the ideas and rhythms and form simple and clear – especially where it might be more complicated, or, triangulated; ‘muse’, Blake as muse)

Attila The Stockbroker, Poet:
‘Blake to me is Jerusalem’ (‘Jerusalem’); ‘I’d occasionally hear my mum singing it at W.I. [Women’s Institute] meetings’ (‘We’ll do at the W.I.’); ‘I was enthused by the basic socialism of it’ (the disparate types of people included equally throughout and, for example, ‘the superstar and loser neck and neck in an amen’); ‘I […] have always believed it should be the national anthem of the England I would love to live in and have spent my adult life fighting for’ (‘It’s England’s radical anthem’ and, for example, ‘We’ll do it bring on chariots’ and, ‘We’ll do it on the beaches with our arms about our chums’, echoing Churchill, these ‘arms’ and this ‘fight’ being about friendship and allegiance); ‘bows of burning gold and chariots of fire’ (‘bring on chariots’); ‘There’s a lot more to the Women’s Institute than jam and Jerusalem, dear.’ (‘We’ll do at the W.I. oh fruitful are our jams’ hinting that their singing of Jerusalem – as is traditional at the start of W.I. meetings – is a musical ‘jam’ of theirs, which is fruitful; like their traditional homemade jams with fruit in, are fruity; and this is meant to imply that there’s a lot more to both the WI’s sung ‘jams’ and their potted ‘jams’, and a lot more to, and in, these very activities and all the W.I.’s other activities, than it might appear, too.)

Luke Wright, Poet:
‘at the beginning of the Atlantic, in the rain’ (‘We’ll do it on the beaches’ with a hint of adversity, natural adversity, ‘the rain’); ‘with our arms round each other’ (with our arms about our chums’); ‘sing Jerusalem’; (‘sing Jerusalem’); ‘There’s something unfailingly English about it.’ (‘It’s England’s radical anthem’); ‘Summons the feelings.’ (‘It’s a summons to the feelings and a figure of their sum’)

Lisa, BlakeFest Helper:
‘seeing things I wouldn’t normally come out and see’ (‘something different from the norm’); ‘an eclectic mix’ (in the poem, of people)

Philip Beckwith, co-founder of Blake Society – as was – 1985:
‘Came to Felpham’s vale many years ago to knock on Blake’s door’ (‘It’s a knock upon that door within our hearts that’s numbered one.’ Blake’s Cottage is numbered ‘1’. The poem is a tribute to Blake and there is the sense that in our own hearts not only might there be a place and soft-spot for Blake, as represented by pilgrims to his former Felpham home, but also, that we are all fundamentally built the same way and somewhere know we are ‘one’. Like the door of Blake’s Cottage, it’s worth opening the door inside us that also says ‘1’. As Blake reminds us.); ‘This time the door was open and we heard’ (open to hearing the ‘amen’ and the ‘anthem’); ‘the cottage’ (‘our cottages’)