Bognor Re-Creative is a bold re-branding of the town towards a creative, cultural and innovative future through the proposition of a tourist and community facility - The Centre of the Imagination:

“What is now proved was once only imagined.”

Our anchor tenant at the Centre of the Imagination would be a permanent celebration of William Blake incorporating work inspired and associated with a Blake exhibition. The historic association of William Blake is a huge cultural resource to Bognor Regis. This has been shown most recently in Oxford whose Blake exhibition has been extremely busy since it opened, helped by the immense media coverage due to the the huge interest in William Blake. The campaign to buy his cottage in Felpham has been featured in every UK national newspaper and even international titles like the New York and Los Angeles Times. This marketing potential is rarely available to most towns.

What we are envisioning for our Centre of the Imagination is a People’s Palace, built as three storeys with refreshments on all floors and with cafés on ground level, snack bars on the first two and fine dining with the viewing gallery on the top floor. A beautiful ark by the sea, with glazed elevations punctuated by brise soleil highlighting internal exhibitions and movement, and at its centre, a natural whitewashed timber feature, catching the infamous Bognor sun and filling the space with optimism and warmth. This would have the ‘Wow' factor – pulling in tourists from London. A major exhibition space could be utilised with a renewed Alexandria Theatre creating a multifunctional adaptive space for theatre (seating for 800 to accommodate West End productions), cinema and a major exhibition space. These could bolster links with local technology and creative businesses such as Rolls Royce and Dyson – they could even utilise this space for displaying technological break-throughs and conferences – a whole new layer of celebrating Bognor’s economic success and entrepreneurship as established companies nurture local young businesses. The Centre of the Imagination would be the hub that would empower the whole town to step up to a better connected cultural and sustainable future. The town could run pilot schemes for both public and private electric transport. Bognor Re-Creative seeks to enhance the forgotten and under-utilised assets prevalent to compose a new brand that can provide a narrative to the future strategic planning of the town. We feel that a concept conceived within the town’s identity will better sustain and guarantee growth – new shoots from old. 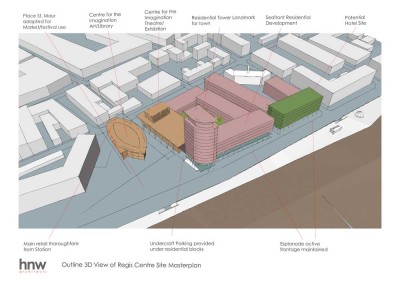